A MASTERPIECE OF FRENCH GOTHIC ART LISTED AS A WORLD HERITAGE SITE, AMIENS CATHEDRAL IS AN UNMISSABLE MONUMENT IN THE CAPITAL OF PICARDY. DISCOVER THIS GREAT LADY AND HER EIGHT HUNDRED YEARS OF HISTORY. 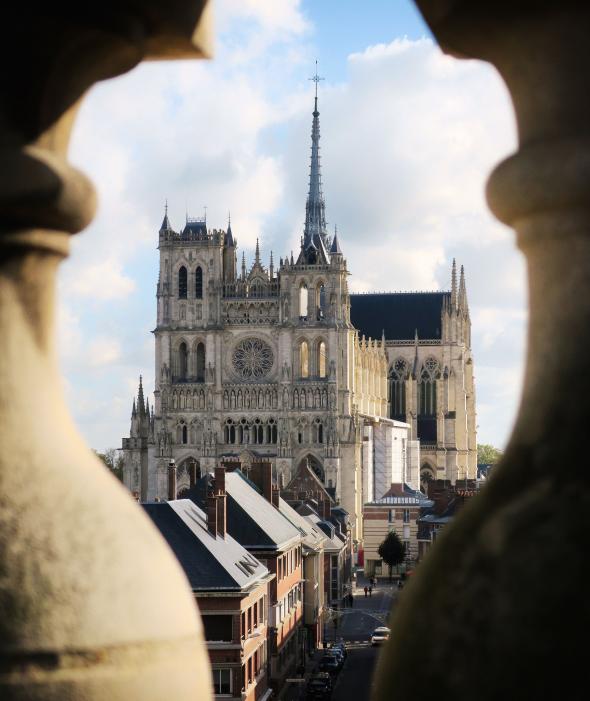 The largest Gothic cathedral in the world

Of gigantic proportions, a 112-metre-high spire, sumptuous sculpted portals, black and white marble paving that leads to the labyrinth... :
Notre-Dame d'Amiens can but dazzle the visitor!

Considered a masterpiece of Gothic art, Notre-Dame d'Amiens is the largest mediaeval cathedral in the world, with an interior volume of nearly 200,000 m3, double that of Notre-Dame de Paris. It also has the highest nave, its vault reaching up 42 metres!

The first stones were laid in 1220, at a time of great prosperity. Three successive master builders carried out the work. In a break with tradition, the architects started by building the facade and the nave. Construction was fairly rapid, indeed most of it was complete by the end of the 13th century: this gives Notre-Dame d'Amiens an architectural uniformity envied by many of its rivals.

800 YEARS OF HISTORYConstruction began in 1220
200 000 M3or twice the volume of Notre-Dame de Paris
145 METRESlength of the cathedral from east to west
42.3 METRESfrom floor to vault

The masterpieces of Notre-Dame d'Amiens

Notre-Dame d'Amiens has been listed as a UNESCO World Heritage Site since 1981, for both its architecture and furnishings. At the entrance each of the three portals bears the name of the main character sculpted on the trumeau: on the left, Saint Firmin, in the centre, the Beau Dieu figure of Christ and, on the right, the Mother of God. The upper level features a large western rose window, measuring 13 metres in diameter, which matches the width of the nave.

13th century bronze recumbent figures are to be found inside. They represent the two bishops of Amiens buried in the cathedral: Évrard de Fouilloy who ordered the construction of the Gothic building and Geoffroy d'Eu, his successor.

The 234-meter long labyrinth served as an initiatory journey for the faithful who progressed along the black paving. The names of the builders can be seen on the central stone, laid in 1288 to mark the completion of the work. The original is held in the Museum of Picardy.

The high relief of Saint Fermin, the relic of Saint John the Baptist, the 110 carved wooden stalls, the Weeping Angel and the Golden Virgin are among the main masterpieces of Amiens cathedral. 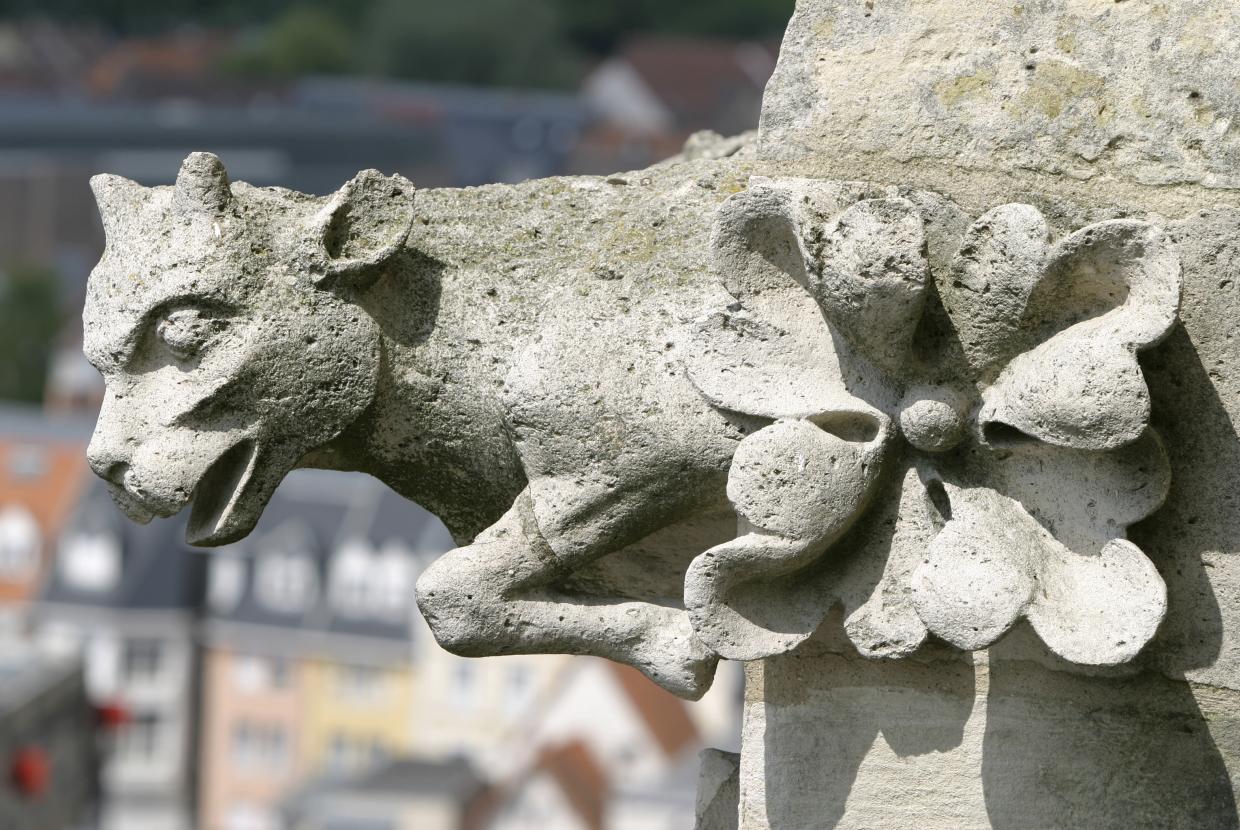 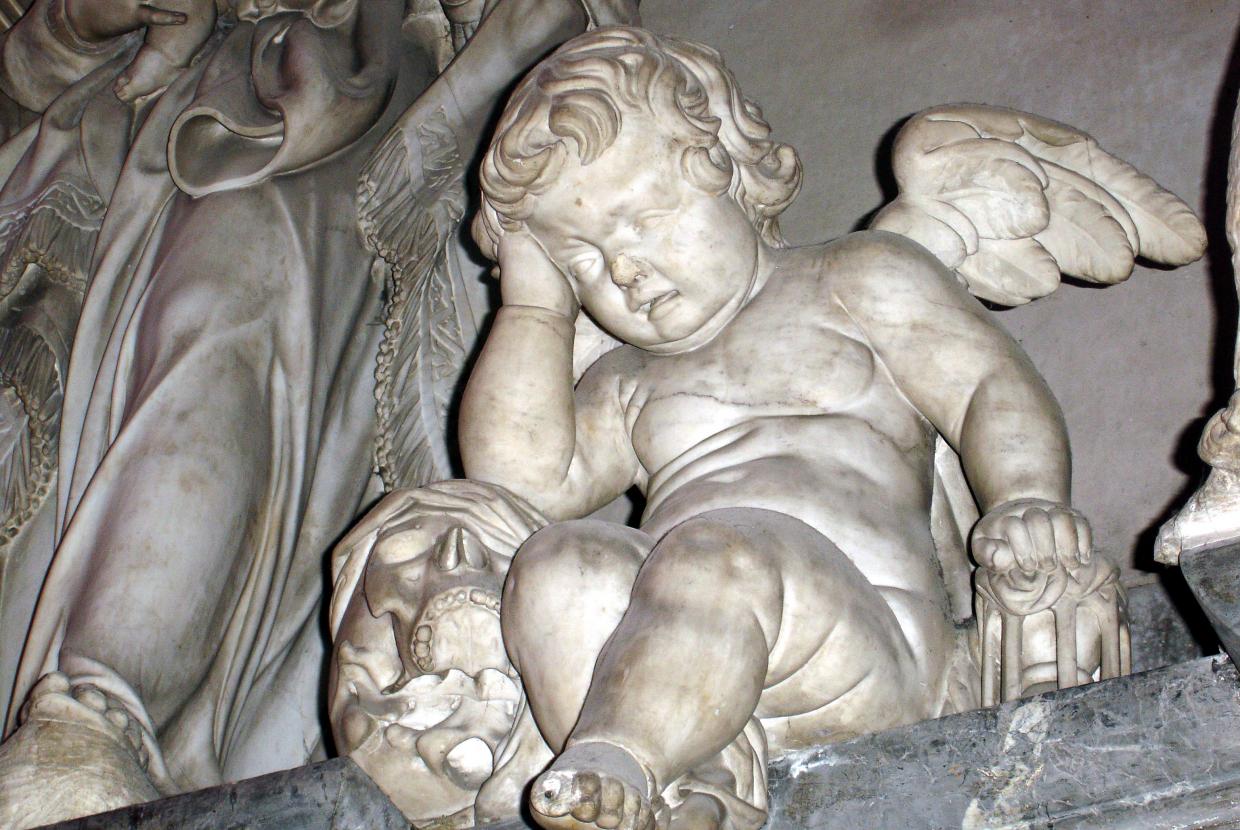 The Chroma show or the cathedral in colours 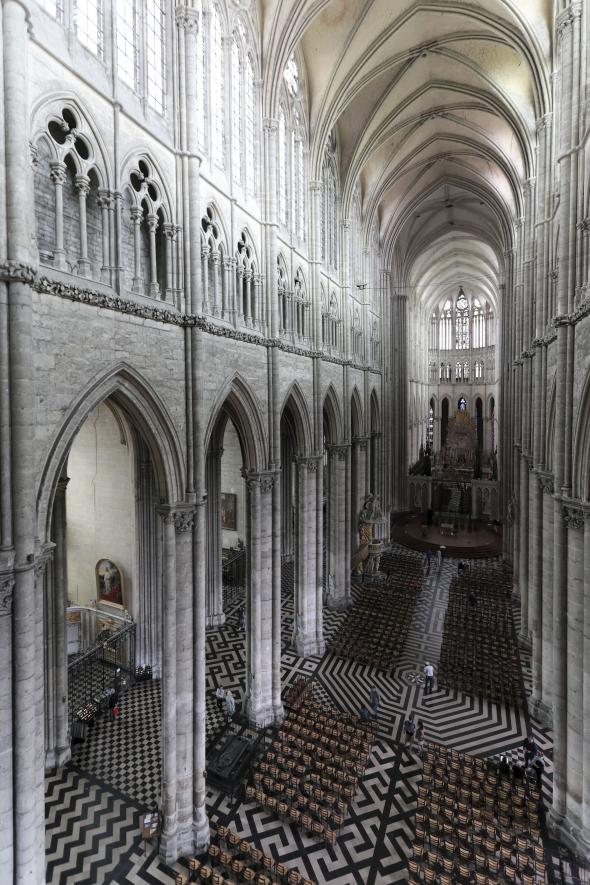 Most of the site is freely accessible (except during religious ceremonies and events), and visitors can also access the towers and treasury accompanied by a guide from the National Monuments Centre. Throughout the year, the Amiens Tourist Office also offers guided tours of the cathedral with professional guides and self-guided audio tours.

From the towers there are beautiful views of the city of Amiens, as well as the only mediaeval cathedral spire still standing. When Viollet-le-Duc carried out the 19th century restorations, he worked mainly on the stairwell turrets, the balustrades at the top of the towers, the gargoyles, and the bell-ringer’s gallery, located above the rose window.

Pieced together over many years, Amiens Cathedral treasury holds many relics. The Paraclete votive crown, made of gold and silver, fine pearls, and enamels and crystal, remains the most precious item. 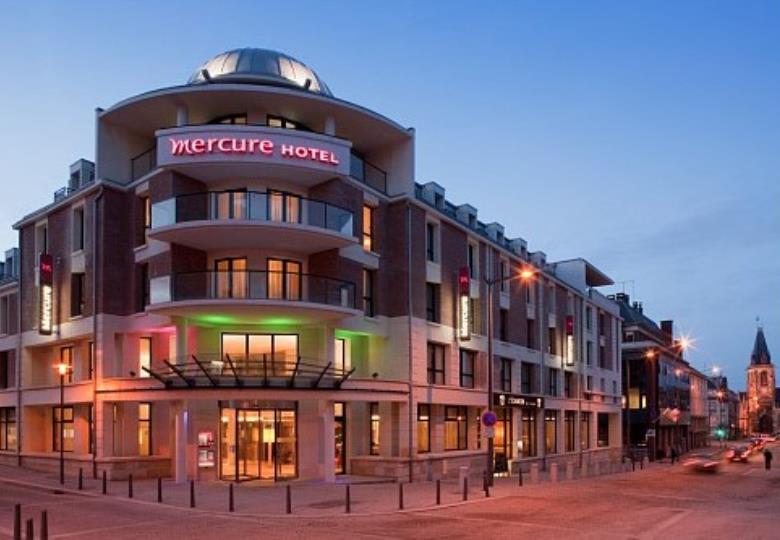 You'll like: its location below the cathedral, the 'prestiges' suites with balcony and picture windows... You're sure to like the story of these precious objects, bearing witness to the early days of Christianity and the... You will appreciate : A traditional restaurant that proposes regional specialities and its location at the foot of the...

Starting at 28
Find out more
Incontournable